Hooves on the Table Please (Part 2)

March 07, 2020
Ahh, models whose hooves are supposed to be flat on the table... I talked about how I like my models to stand well in a previous post--using a table-height view and sandpaper. But then I looked closer at a few works in progress and found a model or two where I used different techniques.

The first model that came up was the Breyer standing pony. She has four tiny hooves that try to touch the table, but depending on the model, they don't always succeed. Part of this is physics. A three-legged stool will be stable, whereas a four-legged one will wobble. Another issue the pony has is that her toes can be a little rounded over.

So I added a small ball of epoxy to each foot. Then I placed her on a flat surface. I use old gift cards, but a scrap of paper or saran-wrap on a desk works well too. (Just don't stick the model to the furniture!) 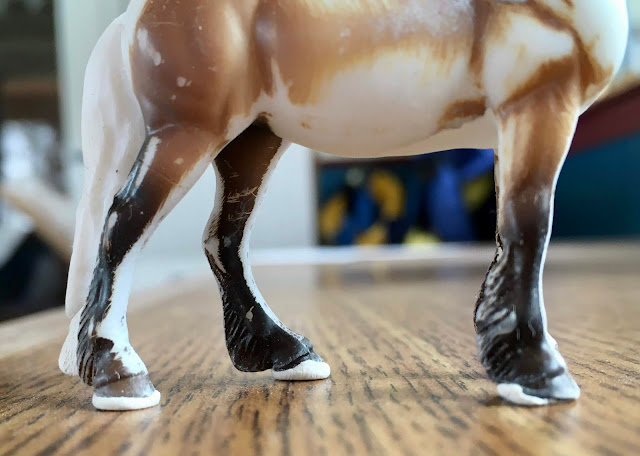 When the epoxy is cured, it'll need to be shaped. Dremel tools, emery boards, and sanding sticks all work great.

I would say that a downside of this technique is that the carved feet are filled in. In addition, carving out the frog and sole on this model may be delicate work. However, I am in favor of a model that looks good standing up in the ring even if it lacks details when lying on its side... because that means it tipped over!

Another model on my desk that didn't stand square was the Gypsy Vanner mold. This particular model actually looked better with both front feet off the table. So I added a clear acrylic rod.

One of my books, Foals: Horse Images for Artists' Reference and Inspiration (amazon.com/Foals-Images-Artists-Reference-Inspiration/dp/1530401402), has many photos of foals playing in the pasture--often with gusto! To capture this feel, I added a pin to this model.

Here the other legs have been modified slightly to accommodate the raised hoof. I used a sewing pin with both the head and point carefully trimmed off. (Please wear protective eye wear if trying this at home.) The pin is thinner than the acrylic rod. I chose the pin over the rod because of the tiny foal-sized foot.

Both the rod and pin are inserted into a hole drilled into the hoof. They are super-glued in place. I leave them a little long at first, and shorten as I work. Looking at the photos, I think I might go a hair shorter on both so my models stand better.

June 26, 2018
A little while back I posted a photo of my new Pan Pastel colors. I've gotten a chance to use them, and have found them quite handy.

First, these colors are all useful—which is not something I say about many of the Pan Pastel colors because they are not all well suited for horses. The orange shade looks a little odd at first, but once it's part of the coat it softens to a nice, bright addition to chestnuts, palominos, buckskins and bays. I think of is as more of a golden tone than orange when the model is finished.
Second, they are easy to use—no sandpaper palette needed, no huge-jar-o-dust waiting to spill. The pans work with both paintbrushes and Microbrush applicators for small details like leg bars and dorsal stripes.
Third, the colors work well together and blend well. For example, on this model I used the Burnt Sienna Extra Dark to deepen a few areas I had dusted with the Burnt Sienna Shade.

So... these new Pan Pastel colors definitely have a place in my s…
Post a Comment
Read more

April 27, 2020
I have been remiss on posting finished models for my personal challenge of finishing one hundred models (instead of starting something new.) As you may have noticed, I’ve started a new model with wire mesh as part of the mane and tail... so many wonderful horsey distractions!
Meet Encore! He is a custom from the G3 rearing Andalusian. This is one of two models in a bow that started with this mold. I found the mold a little tricky to work with because of his pose. When tamed into a new pose, however, he’s quite the sweetie!

Encore has been on my workbench for about five years. My friend, Karen Prescott, began two bowing models at the same time and they were completed a long time ago.


I chose bay roan for this guy, a color that can be painted many ways with many mediums. I chose a pastel base coat and pastel pencils. I purchased two brands and ended up using them both because they dulled quickly. I drew on many tiny hairs, then sprayed with Testors Dull Coat, and repeated the process. …
Post a Comment
Read more