I've been looking forward to the new line of "mini me" Stablemate molds, but because I decided to support local toy stores and tack shops by shopping here in Michigan so it took me a little while to find them all.

There are seven new molds, increasing the total number of Stablemates to 82:

The first little guy in my hot little hands is Smart Chic Olena. This mold has a lovely long tail with lots of details, a handsome head, and nice muscling in both the hindquarters and left shoulder. His chest is detailed and not marred by seams. His overall body shape fits his breed with a nice hip and deep girth. Viewed from the top, his left ribs look more "sprung" than his right, but he isn't as lopsided as the new standing Warmblood. His hooves aren't carved and lack detail, but have a little more to them than the new walking thoroughbred mold.

The mane is much like Alborozo's in that it's long and plastered to his neck and shoulder with the "wind" blowing it forward. The forelock wraps around one ear (also like Alborozo's, but not as much). His right ear seems to be flipped the wrong way (curving away instead of in). Both ears seem small to me, even for a Quarter Horse. His front legs appear to be two different lengths, something I hadn't noticed on the traditional model. On my model, the left leg broke on me, so maybe my model wasn't quite right. 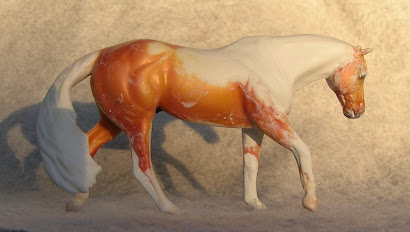 I have to admit, the Connemara Mare mold didn't catch my eye in Traditional scale. But as a mini, she has me completely converted! I liken her to the mini Brichen/Vanner who is also much cuter when small.

This mare is jam-packed with details that add up to her spunky personality. Even in this small scale, Sarah's sculpting shines. From clearly defined joints and tendons to a pooky lip, this mare is special.

She can be a little tricky to prep because she has many tight spots. But if you have a small piece of fine sandpaper (400) and a tiny round file, you'll be able to reach those tricky spots and deal with any feathering that may not have come across well on your particular model. Her windblown mane and swishing tail will be fun to paint and her playful pose will be fun to modify. 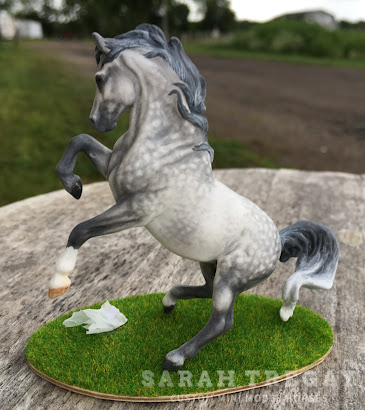 The third model I have is the Clydesdale Stallion. He is Chris Hess blast from the past! I've owned several of the Traditional-scale ones over the years. He looks awesome in mini-scale woodgrain and I'll be keeping an OF of this model for sure.

He is a mini of the retooled, muscle-y version. The bobs in his mane and bow in his forelock and tail are nice touches, his legs and hooves are substantial enough to withstand modification. The later are do not have frogs. His feathering has some detail and doesn't overwhelm. His ears and nostrils are nicely shaped and carved out. His eyes are large and kind, although he still looks a little stressed around the mouth after all these years.


Artists are going to love having another heavy draft mold--even though this guy is small when compared to other Stablemates. For example, his overall proportions resemble this stocky Percheron. The docked tail can easily be resculpted to a braided one to reflect the changing laws in Europe and some States that now ban the practice. 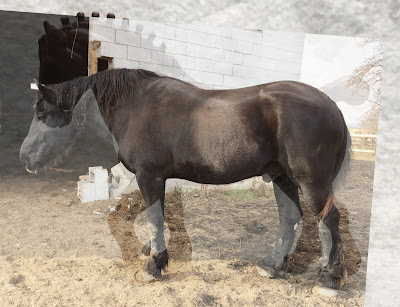 The model's pose is static, but that might work out well—he could be moved into a more dramatic pose or moved to standing poses. It will be fun to see what artists create with this old boy.
Also, I’m having that issue where a pale gold color is seeping through the primer. Perhaps it is the wood grain color showing up again. 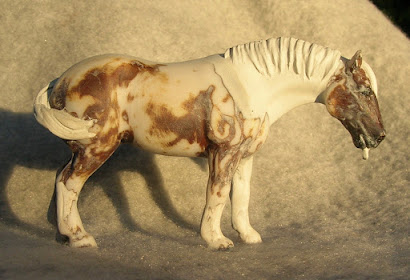 The Indian Pony mold has all the nostalgia of the original. With her easy gait, turned head and smooth lines she'll be a great starting point for customs. I think she'd turn into a great mule.
Keep in mind that an artist might address her downhill build, her hind legs that are all cannon bone, her boxy feet, and her face that is wide at the eyes and narrows at the nostrils. Her mane is on both sides, but easy enough to sand off if a new one is planned. The tail will take a little more sanding as it is attached both low on the hindquarters and at the hock.
Size wise, the Indian pony is not scaled to be a pony. He stands taller than the Clydesdale and MFT as about the same height as Django at the hip.
Cute alert! The Fell Pony is petite and packed with adorable. He is having an amazing hair day from his windblown forelock that takes over his face, to his feathers that move with his step, to his long mane and tail. He even has a little beard under his chin.
Look for little neck wrinkles and nicely sculpted muscles in the one shoulder, legs, and hindquarters. His ears are also nicely done, not 100% buried in the mane like other pony molds.
While not as versatile as other molds because of the forelock on his face, I'm sure he'll make a wonderful simple custom.
I'm excited about working with the Missouri Fox Trotter in Stablemate Scale. His beautiful head and light-breed build will be a wonderful addition to any mini customizer's body box. His long mane blows back in the wind after a generous bridle path. And her whimsical tails curls up behind him. Legs are long and clean and hooves are small but nicely shaped (not carved). Twitching ears need a touch of reshaping. I can't wait to see the customs from this mold.
Last but not least is the mini Fighting Stallion. Again, he not an overly versatile mold because of his pose. From Mustangs to Lippizaners, I can picture a handful of customizing options in the hands of artists.
I'm looking forward to seeing these models customized. Have you created one? Please feel free to share.

June 26, 2018
A little while back I posted a photo of my new Pan Pastel colors. I've gotten a chance to use them, and have found them quite handy.      First, these colors are all useful—which is not something I say about many of the Pan Pastel colors because they are not all well suited for horses. The orange shade looks a little odd at first, but once it's part of the coat it softens to a nice, bright addition to chestnuts, palominos, buckskins and bays. I think of is as more of a golden tone than orange when the model is finished.      Second, they are easy to use—no sandpaper palette needed, no huge-jar-o-dust waiting to spill. The pans work with both paintbrushes and Microbrush applicators for small details like leg bars and dorsal stripes.     Third, the colors work well together and blend well. For example, on this model I used the Burnt Sienna Extra Dark to deepen a few areas I had dusted with the Burnt Sienna Shade. So... these new Pan Pastel colors definitely have a plac
Post a Comment
Read more

April 27, 2020
I have been remiss on posting finished models for my personal challenge of finishing one hundred models (instead of starting something new.) As you may have noticed, I’ve started a new model with wire mesh as part of the mane and tail... so many wonderful horsey distractions! Meet Encore! He is a custom from the G3 rearing Andalusian. This is one of two models in a bow that started with this mold. I found the mold a little tricky to work with because of his pose. When tamed into a new pose, however, he’s quite the sweetie! Encore is a red roan taking a bow. CM by Sarah Tregay. Encore has been on my workbench for about five years. My friend, Karen Prescott, began two bowing models at the same time and they were completed a long time ago. I chose bay roan for this guy, a color that can be painted many ways with many mediums. I chose a pastel base coat and pastel pencils. I purchased two brands and ended up using them both because they dulled quickly. I drew on many tiny
Post a Comment
Read more

April 22, 2020
I hope everyone is safe and healthy during these difficult times. I’m saddened that we won’t be gathering for spring live shows and this summer’s Breyerfest. I’m going to miss getting together with amazing friends in Michigan, Ohio and Kentucky. Until things change, thanks to everyone sharing their corner of the hobby world online! I needed a creative jolt to get me out of a quarantine funk, so I opened up my package of sculpting mesh. My victim is a Paralympic Driving horse that will become a Fjord custom. Harald, my previous Fjord, is from the same mold. His mane was a challenge for me because of the upright nature of it... so the contour mesh. Look for fine sculpting mesh at stores or online art-supply vendors. Slot along crest of neck cut with small miter saw. First, I cut a slot along the crest. This will hold the mesh in place. Then I cut a piece of mesh to fit. I left plenty of extra that I will trim and shape later. Scissors cut the mesh just fine, but please be
Post a Comment
Read more