Number Eight is Figaro, a grulla Lusitano stallion. I tried out some new art supplies with him.

First I put down a basecoat of Rust-Oleum 2x paint plus primer that I had used before (https://customminimodelhorses.blogspot.com/2018/06/rust-oleum-painters-touch-paint-primer.html). Next I got out my new Pan pastel color Raw Umber 780.5, which reminds me of the color of a horse that has rolled in the mud and it has dried. 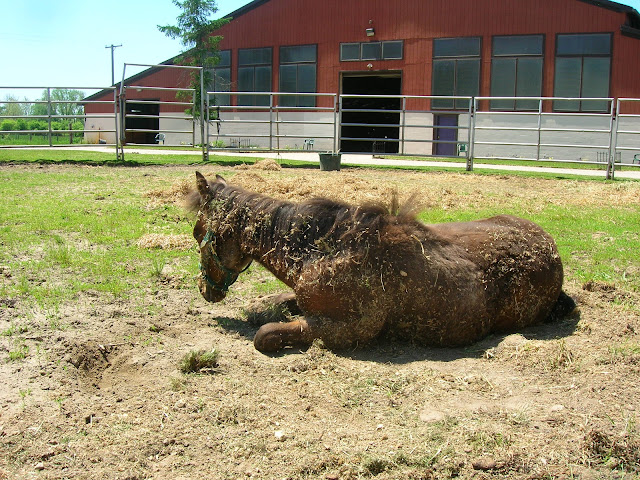 But... I was able to get a grulla tone with this, not just mud. 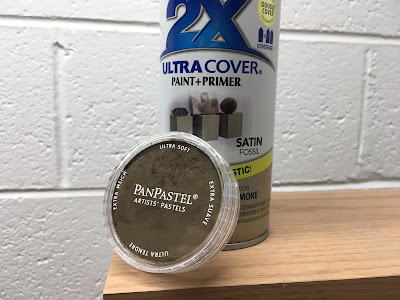 The next new item was a cheap craft paint that I bought to save time in mixing up a chocolaty brown for eye color. It wasn't successful because there was very little pigment in the paint, even after stirring it. I purchased it to save time, not to waste time with many layers. 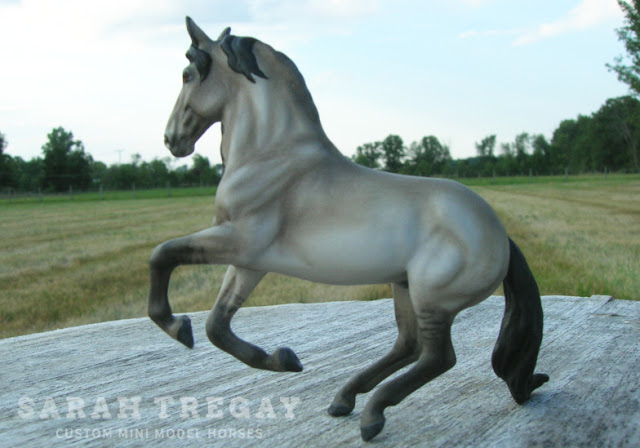 June 26, 2018
A little while back I posted a photo of my new Pan Pastel colors. I've gotten a chance to use them, and have found them quite handy.

First, these colors are all useful—which is not something I say about many of the Pan Pastel colors because they are not all well suited for horses. The orange shade looks a little odd at first, but once it's part of the coat it softens to a nice, bright addition to chestnuts, palominos, buckskins and bays. I think of is as more of a golden tone than orange when the model is finished.
Second, they are easy to use—no sandpaper palette needed, no huge-jar-o-dust waiting to spill. The pans work with both paintbrushes and Microbrush applicators for small details like leg bars and dorsal stripes.
Third, the colors work well together and blend well. For example, on this model I used the Burnt Sienna Extra Dark to deepen a few areas I had dusted with the Burnt Sienna Shade.

So... these new Pan Pastel colors definitely have a place in my s…
Post a Comment
Read more

April 27, 2020
I have been remiss on posting finished models for my personal challenge of finishing one hundred models (instead of starting something new.) As you may have noticed, I’ve started a new model with wire mesh as part of the mane and tail... so many wonderful horsey distractions!
Meet Encore! He is a custom from the G3 rearing Andalusian. This is one of two models in a bow that started with this mold. I found the mold a little tricky to work with because of his pose. When tamed into a new pose, however, he’s quite the sweetie!

Encore has been on my workbench for about five years. My friend, Karen Prescott, began two bowing models at the same time and they were completed a long time ago.


I chose bay roan for this guy, a color that can be painted many ways with many mediums. I chose a pastel base coat and pastel pencils. I purchased two brands and ended up using them both because they dulled quickly. I drew on many tiny hairs, then sprayed with Testors Dull Coat, and repeated the process. …
Post a Comment
Read more